To much fanfare Woolworths announced this week it is trialling a scheme of direct price negotiations with a group of farmers in the Manning Valley, on the New South Wales mid-north coast, who will sell milk directly to the supermarket giant under the Farmers’ Own label.

It’s front page news everywhere. One might ask why, after all lettuce growers and onion growers and egg producers have been getting together for years and dealing directly with Woolworths. All  farmers who want to direct supply supermarkets have to do is find their point of difference whatever that maybe, pitch it to the supermarket and if they like it you then sit down at the table and iron out the finer points ( I understand it has taken the Manning River farmers 14 months to get this far). Then when everyone is happy you sign on the dotted line for hopefully a genuine and sustainable outcome for the farmers that gives them a price improvement or security or in the ideal world both. Sadly ABC National and Background Briefing’s Hagar Cohen chillingly showed some of these contracts can be a death knell for farmers who direct supply.

So if this new way of doing business with some farmers is not out of the norm why is Woolworths making such a big fuss and why is the media so interested? I think ACCC Chairman Rob Sims summed it up quite rightly as a massive PR exercise. The Australian public (and Woolworths shoppers) do love their farmers and they expect the supermarkets to do the right thing by them

“The fact that Woolworths might be reacting to public opinion, I think that’s what large companies do all the time. They need to be aware of their role in society and act accordingly.”

As per his comments in The Weekly Times Mr Logan said supermarkets have gone from farmer customer, to competitor to supplier in recent years. Under this supermarket model, with contracted processing,  he was concerned which player would take the risk manager role– normally designated to the milk processor. Risk is essential for managing oversupply or under-supply of milk, a natural disaster, price spike or price fall, Mr Logan said.

From my perspective we have a long way to go before we get balance and equity back into the Australian supply chain. Whilst all the power sits at the top with two supermarkets who control over 70% of the market and pay multi million dollar bonuses to  management to deliver  billion dollar profits you don’t have to be Einstein to see that in reality despite all the spin  neither their customers nor their farmer suppliers are at the top of their priority list.

And are they pulling the wool over their customers eyes? Not according to these comments in the Age via Milk Maid Marian. 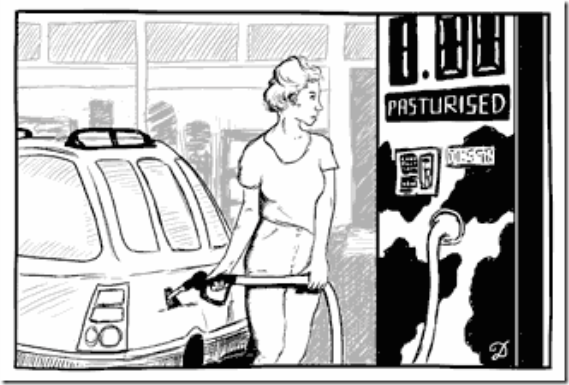