Why we did the research at Lemon Grove 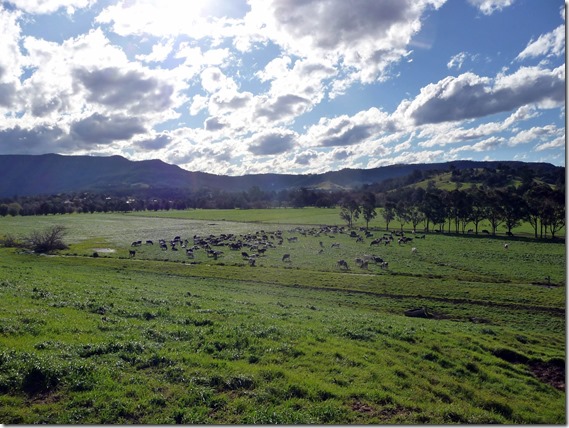 To explore pastures that could potentially reduce Carbon footprint whilst improving productivity, profitability, and management (resilience)

To grow productive (quantity) and nutritious (quality) pasture that will be

The trial was conducted at Lemon Grove Research Farm, located on the Minnamurra River floodplain just to the east of Jamberoo, NSW. Control and treatment paddocks were identified in December 2010 and soil tests were taken. One paddock was to be identified as the “trial/treatment” paddock and was to be prepared for the new pasture; the other “control” paddock was to be farmed as per the rest of the property, retaining its kikuyu base and being sown down to oats and Italian ryegrass in early autumn.

The trial paddock was sprayed with 6L/ha of Roundup Powermax (540 g/L glyphosate (present as the potassium salt)) on 17.2.2011. Pasture trash was mown and removed and the trial paddock sown down to 110kg/ha of Cooba oats on the 19.2.2011. A small area was topped up in early April following flooding in March. Grazing of the oats commenced shortly after and continued until the 5th of August when the paddock was sprayed again with 6L/ha of Roundup Powermax on 5.8.2011. The paddock was then direct drilled with a disc seed with the trial seed mix of:

The trial paddock was treated with 150ml/ha of Verdict (520g/L haloxyfop present as the haloxyfop-r-methyl ester) selective grass herbicide on the 20.2.2012 to control grass weeds. It was not over sown in the autumn of 2012. 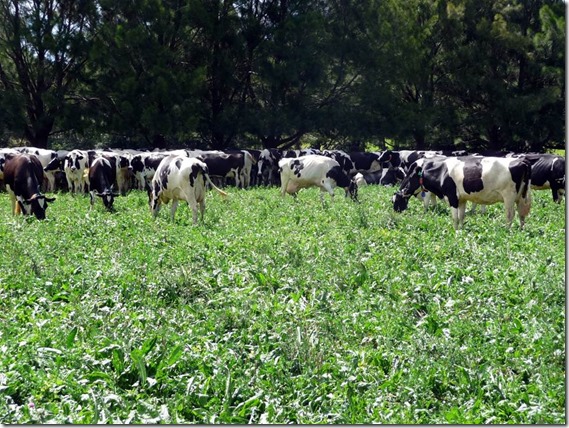 The “control” paddock was sprayed with 200mls/ha of Roundup Power Max on the 1/3/2011 to suppress kikuyu growth and facilitate early planting of a mix of 35kg/ha of Feast II ryegrass and 60kg/ha of Cooba Oats. Grazing commenced 16th April 2011. It was resprayed with 225mls/ha of Roundup Powermax on the 16/42012 to suppress kikuyu prior to autumn planting with a similar mix 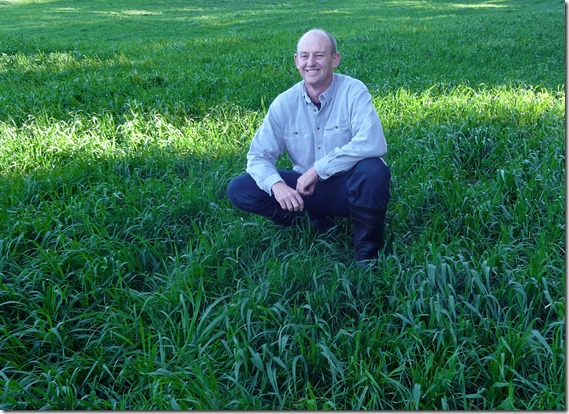 Fertiliser was applied to both control and trial paddocks as deemed necessary by the farmer. This include urea, some mixed blended fertilisers and an application of liquid dairy effluent. Pastures were grazed only by the dairy herd and no fodder was conserved during the trial on the two plots. Pasture dry matter was estimated pre and post grazing using a C-Dax towable pasture metre and pasture yields determined. Yield data was validated using pasture cuts and estimation of dry matter during the trial. The nutritive value of the trial and control pastures were tested by NIR at Westons Laboratories, NSW.

Where we did it 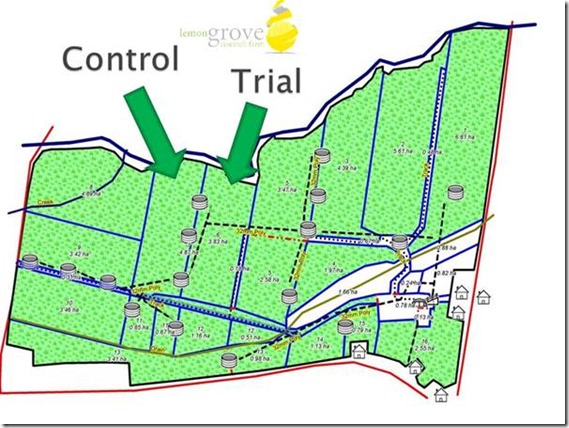 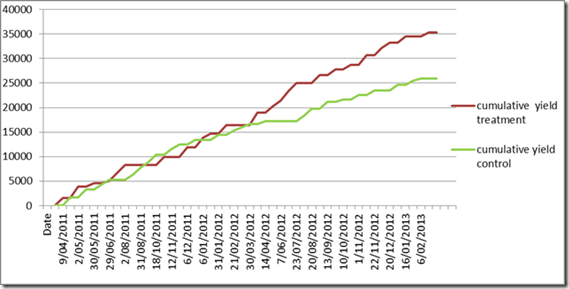 The  results blew us away 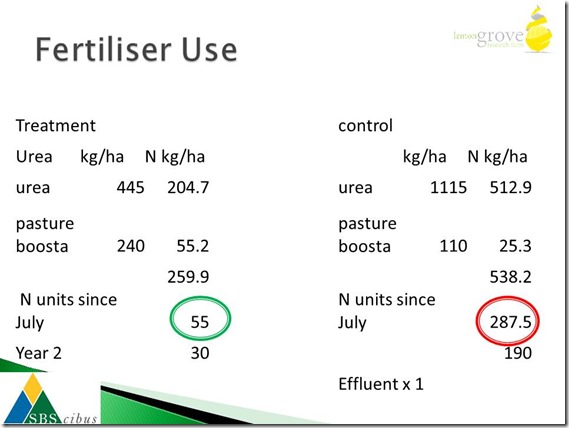 Pasture trial proves to be good news for people,cows and the planet 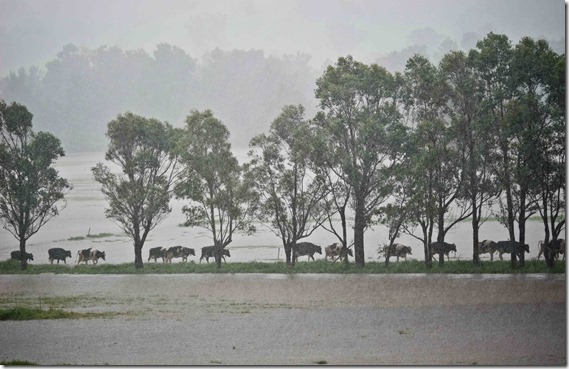 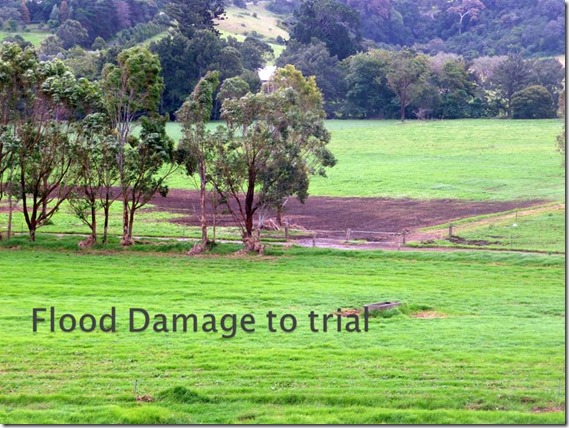 This farm based trial has provided useful evidence of the potential for alternative pasture systems based on legumes and herbs on coastal dairies in NSW. The trial pastures have provided at least as much dry matter in the first year as the conventional system with the yield data in year 2 being substantially higher in the trial paddock. The trial pasture appears to have performed very well in the autumn of its 2nd year and did not suffer a planting lag as per the conventional system. It also appeared to continue growing very well off a one off significant rain event in October 2012 during what was a very dry spring and summer in the region.

Nitrogen inputs were significantly reduced in the trial compared to the conventional plots with potential here to reduce fertiliser costs as well as nitrous oxide emissions and exposure to volatile nitrogen pricing. Full soil test data is not available at the time of writing.

Feed quality at all times on the trial was excellent with the farmers reporting anecdotal improvements in milk production when grazing trial pastures, particularly between November and March.

Weeds have been troublesome including both broadleaf and summer grass weed invasion in summer of 2012-2013.

These pastures have significant potential for NSW grazing based dairy systems. There has been considerable success with similar systems on the mid north coast and inland areas, however, problems with both stem root nematode and water-logging have been encountered on some properties. Soil characteristics, particularly, potential for poor drainage, underlying weed burdens and regional pasture pathogens need to carefully considered, when selecting alternative pasture systems as part of a pasture “portfolio”. However, there is considerable flexibility within both pasture species and cultivars in the group of pasture species under investigation to further explore these systems on a region by region basis. Farmers and scientific organisations can successfully partner to produce useful field based research.

Where to from here

Adoption of research, innovation and practices are critical to attaining long term goals

This video is a 4 minute summary of the project