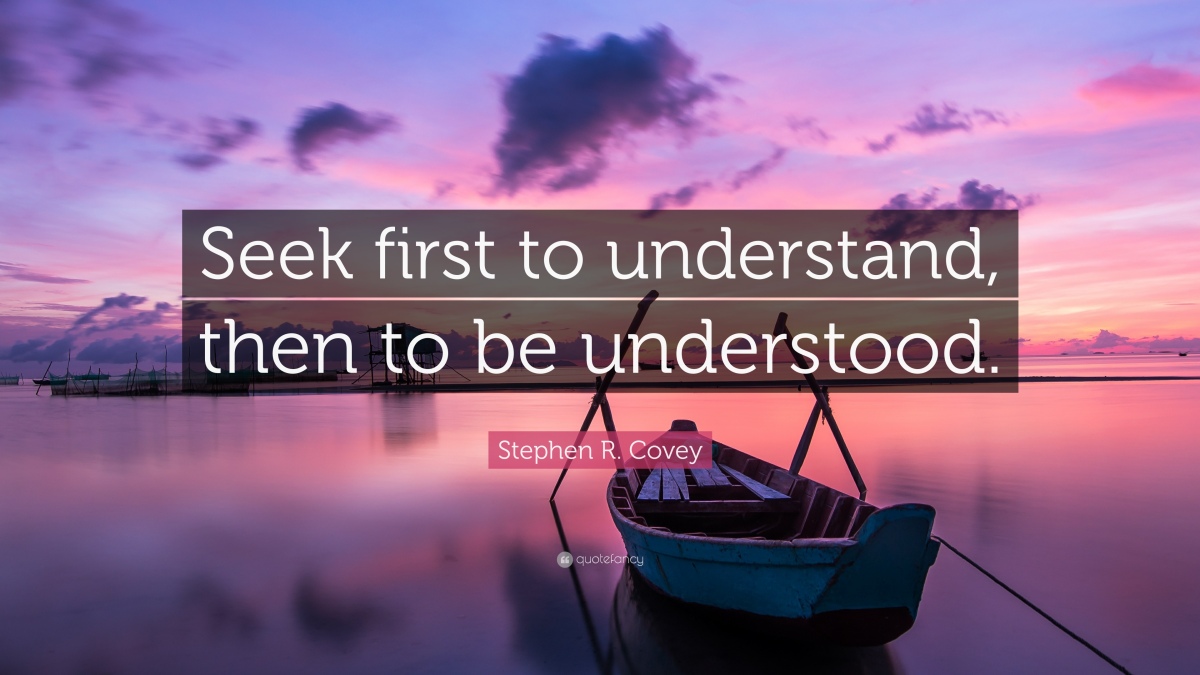 In early 2020 I joined a Global Leadership Academy.  There are five people from around the world and the coach in my core group. Our group are also able to participate in a diverse offering of sessions with the wider academy

Yesterday I got up at 5am for Office Hours (see footnote) with Dave Stachowiak from Coaching for Leaders. I was keen to get the wisdom of the crowd to help leverage an opportunity for Picture You in Agriculture. How grateful was I to get my opportunity workshopped by people of the calibre of Emily Leathers . You can listen to Dave interview Emily here

I am also part of a Coaching for Leaders Academy book club whose focus is having conversations about race and justcie. See my previous blog here

As Dave reminds us

Words and intentions are a first step — movement through action is also important.

We are starting by tapping into the wisdom of Stephen Covey and first seeking to understand beginning with reading White Fragility: Why It’s So Hard for White People to Talk About Racism* by Robin DiAngelo.

The book is blunt

White people in North America live in a society that is deeply separate and unequal by race, and white people are the beneficiaries of that separation and inequality. As a result, we are insulated from racial stress, at the same time that we come to feel entitled to and deserving of our advantage. Given how seldom we experience racial discomfort in a society we dominate, we haven’t had to build our racial stamina. Socialized into a deeply internalized sense of superiority that we either are unaware of or can never admit to ourselves, we become highly fragile in conversations about race. We consider a challenge to our racial worldviews as a challenge to our very identities as good, moral people. Thus, we perceive any attempt to connect us to the system of racism as an unsettling and unfair moral offense. The smallest amount of racial stress is intolerable—the mere suggestion that being white has meaning often triggers a range of defensive responses. These include emotions such as anger, fear, and guilt and behaviors such as argumentation, silence, and withdrawal from the stress-inducing situation. Source White Fragility:

I am a white person. I see the world through my lived experiences. I am also a woman who grew up on a family farm. I was told by my parents from an early age that men have privileges women don’t and that I should make the most of the intellect I was given because my brother would be inheriting the farm. That’s a very different lived experience to African Americans or Aboriginal and Torres Strait Islander people.

When a racial group’s collective prejudice is backed by the power of legal authority and institutional control, it is transformed into racism, a far-reaching system that functions independently from the intentions or self-images of individual actors.

J. Kēhaulani Kauanui, professor of American studies and anthropology at Wesleyan University, explains, “Racism is a structure, not an event.” American women’s struggle for suffrage illustrates how institutional power transforms prejudice and discrimination into structures of oppression. Everyone has prejudice and discriminates, but structures of oppression go well beyond individuals.

Therefore, the only way women could gain suffrage was for men to grant it to them; women could not grant suffrage to themselves.

Similarly, racism—like sexism and other forms of oppression—occurs when a racial group’s prejudice is backed by legal authority and institutional control. This authority and control transform individual prejudices into a far-reaching system that no longer depends on the good intentions of individual actors; it becomes the default of the society and is reproduced automatically.

Racism is a system.

And I would be remiss if I did not acknowledge the intersection of race and gender in the example of suffrage;

White men granted suffrage to women, but only granted full access to white women. Women of colour were denied full access until the Voting Rights Act of 1964.

The system of racism begins with ideology, which refers to the big ideas that are reinforced throughout society. From birth, we are conditioned into accepting and not questioning these ideas. Ideology is reinforced across society, for example, in schools and textbooks, political speeches, movies, advertising, holiday celebrations, and words and phrases. These ideas are also reinforced through social penalties when someone questions an ideology and through the limited availability of alternative ideas. Source White Fragility

I am currently one third of the way through the book. I am finding it a bit depressing I am looking forward to seeing a way forward

Dave has been helping people understand for a long time and you can listen to his podcast with Willie Jackson  here   Wille is a diversity, equity, and inclusion consultant and facilitator with ReadySet, a boutique consulting firm based in the San Francisco Bay Area. He is a frequent writer and speaker on the topics of workplace equity, global diversity, and inclusive leadership.

I have now finished reading the book and its a tough, tough read

I think the Chapter I found toughest to read was Chapter 11 White Women’s Tears. I now understand why Amy Cooper’s response to this event was so wrong on so many levels  and a lot of admiration for Christian Cooper on so many levels

We can interrupt our white fragility and build our capacity to sustain cross-racial honesty by being willing to tolerate the discomfort associated with an honest appraisal and discussion of our internalized superiority and racial privilege. We can challenge our own racial reality by acknowledging ourselves as racial beings with a particular and limited perspective on race. We can attempt to understand the racial realities of people of colour through authentic interaction rather than through the media or through unequal relationships. We can take action to address our own racism, the racism of other whites, and the racism embedded in our institutions. All these efforts will require that we continually challenge our own socialization and investments in racism and the misinformation we have learned about people of color. We can educate ourselves about the history of race relations in our country. We can follow the leadership on antiracism from people of color and work to build authentic cross-racial relationships. We can get involved in organizations working for racial justice. And most important, we must break the silence about race and racism with other white people. Source White Fragility

Dave Stachowiak from Coaching for Leaders hosts an Office Hours session each month so we can connect live as a community and share perspectives to help each other with current situations. Here’s a few reasons why people participate: