Steph was born and raised in the suburbs of Perth, Western Australia. She has just graduated with a degree in Ag Science with First Class honours and is passionate about the beef cattle industry and ultimately wants to work in the live export industry, in animal welfare, training, education and supply chain management. She is now honing her skills as a jillaroo just about to start work for Annabelle Coppin on the huge Yarrie station at Marble Bar in WA

Steph first told me this story on the couch at the National Press Club in Canberra and I was fascinated. I have watched the cows going to the paddocks backwards from the dairy for years and must admit they way they do it intrigued me but never understand the “science” behind it

There are countless times I have said “I never thought of it like that”, and it always makes me think that well… I don’t think enough. How could I not pick up on something so fundamental? The skill of observation often sets people apart in this industry, if you have it, you’re one up, if you don’t, well… awkward! However, sometimes I tend to focus on particular things, and stop observing the bigger picture.

One example of when I have said “I never thought of it like that” was when the intricacies of cattle pads (tracks) were explained to me.

Question time! Cow pads… are they straight… or meandering?

If you answered meandering, two points to you! Next question… why do they meander?

Are the cows drunk? Are pastoralists all over Australia spiking the lick for a laugh? Are cattle just not blessed with the gift of balance like the Australian gymnastics team? Nope. Is my imagination in overdrive? Yes…

The answer is to do with livestock senses. In the short time I have been working with beef cattle, I have had two main teachers who have bestowed a lot of knowledge upon me. Well I don’t know if I have said that quite right, because it is not as if they dropped a bomb of knowledge on me. I suppose it was more not just what they taught me, but also how they taught me. It wasn’t just facts and figures from a book, it was about using my skill of observation, and asking myself questions about what I was seeing and why I was seeing it.

It should come to you as no surprise that both of these people are well respected in the beef industry, and very good at what they do. They are Doug “Dougie” Jenkins, and Boyd Holden.

There is a whole spiel on livestock senses I could go into, but I’ll cut to the chase about meandering cattle pads.

Cattle have peripheral vision. That means they have a wide angle vision, like a panoramic camera shot. They also have poor depth perception directly in front of them. Humans, on the other hand, have binocular vision, so we can see directly in front of us, but not so much to the side, and certainly not behind us!

One theory entertains the idea that our vision is dictated by our predator- prey status throughout evolution. Cattle are herbivores, they are the prey. Furthermore, they are grazing animals. Like that game we played in primary school “heads down, thumbs up”, drive past a paddock of cattle, and you will see them playing “heads down, bums up”.

Now, if the cattle are busy playing “heads down, bums up”, who is on the lookout for predators sneaking up in the grass?

If cattle had binocular vision, it would serve zero purpose to them as they had their head in the grass, munching away. They’d just be looking at grass. However, with their panoramic vision, they have poor vision directly in front of them (the grass) but good vision side to side. 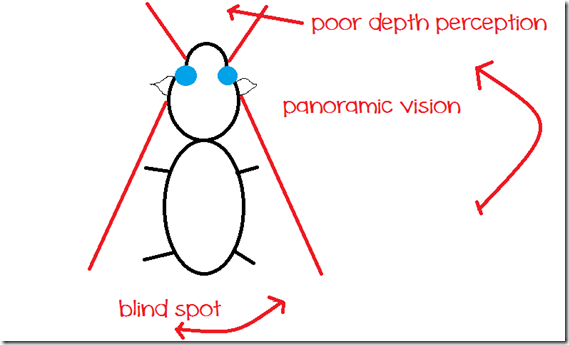 Now first things first- that is an awful picture, yes I am aware! It looks more like a pig than a cow.

Now back to business. So can you see in this picture, with the panoramic vision, the cattle can be scanning for predators while they are grazing? Why it is more useful for them to be able to see around them, than directly in front of them?

Next, take note of the blind spot. Even with their panoramic vision, cattle, like us, are not blessed with being able to see directly behind them, which means they are also susceptible to people running up behind them yelling things like “boo” or “RAHHH”, things other people think are funny, but as the person with no eyes in the back of our heads, things we do not think are funny…

So imagine you are a cow walking around. You have poor depth perception directly in front of you, (I’m not sure if that is near or far sightedness?), good vision side to side, but then you have this annoying blind spot. That one spot which leaves you open to a dog or another predator, sneaking up behind you. Of course, being in the “prey club” as opposed to being a predator, I would be a bit paranoid on top of that if I was a cow.

So, you need to check behind you, to make sure nothing is eying you off as dinner (unless you are in a hoof and hook class and then you should be eying off that human on the other end of your lead rope!). 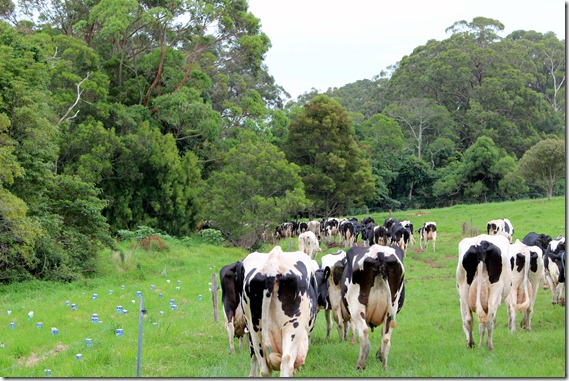 Now, we all have that annoying friend who bumps into us when we’re out shopping, they keep looking at window displays, cute boys walking past etc… Fact is, when you turn your head, you often wander off your pathway. That’s why we have mirrors on our cars, especially those add ons which show you your blind spot! Wandering out of your lane is far worse than bumping into your friends!

That is why cattle pads meander. Cattle need to check their blind spot as they go on their way. They have fairly short, inflexible necks, so when they bend them to play peek-a-boo, it affects their whole body, sending them off course ever so slightly. 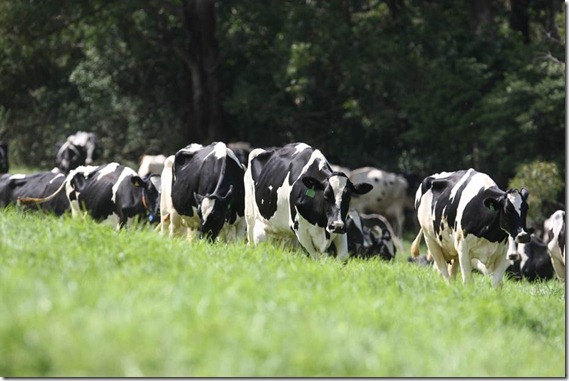 Horses on the other hand, have longer, more flexible necks, are able to look behind them without such an obvious effect on their balance and as a result, their tracks aren’t as meandering.

I love learning bits of information like this. It is such an important concept to me, to be able to understand livestock senses, and why they do what they do, to be able to work with them effectively. Sometimes we are so focused on awesome research and discovering new things, we don’t discover what already is.

…. and a great night was had by all on the couch at the National Press Club as you can imagine with story tellers like this for entertainment. Thanks Steph I must admit my life is re-energised since I met you

This is one amazing dairy cow. Her name is Murribrook Lieutenant Tina 2EX and she is a superb example of a Holstein dairy cow. 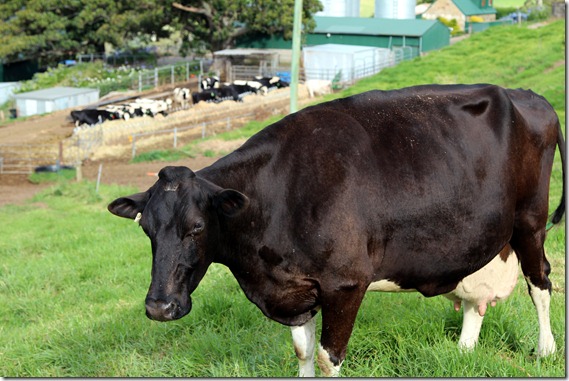 Tina is 16 years old and has had 12 calves and has just gone into the resting paddock waiting to have her thirteenth calf.

In her lifetime she has produced a whopping 153000 litres of milk. That means Tina  provides 1500 Australians with milk each year

Up until recently Tina has always taken pride of place leading the cows to and from the dairy. She has this knack of knowing when milking is due and lines up at the paddock gate to notify the herd its times to walk back to the dairy.

Contrary to animal activist propaganda which suggests dairy farmers treat their cows  “as little more than milk-producing machines,” good dairy farmers select and breed from cows who have a number of qualities that ensure healthy and happy cows.

Tina is a great example of this proven science. Tina is a direct descendent of a very famous imported cow  called  Walkerbrae Triple T Toni, Ex 24*.  Toni was imported by Murray Sowter .

How gorgeous is she and how much does Tina look like her.

Murray was involved in the first live exports from Canada. See his website here http://www.murribrook.com/cow-families/toni.html

Lightening Tina – Tina’s granddaughter they are all peas in pod

These days Lieutenant Tina has a life of luxury. She lives in a paddock close to the dairy and doesn’t have to walk very far to access water and shade.  She is just adorable and she has a special place in our hearts.

Read about Tina in the Illawarra Mercury here